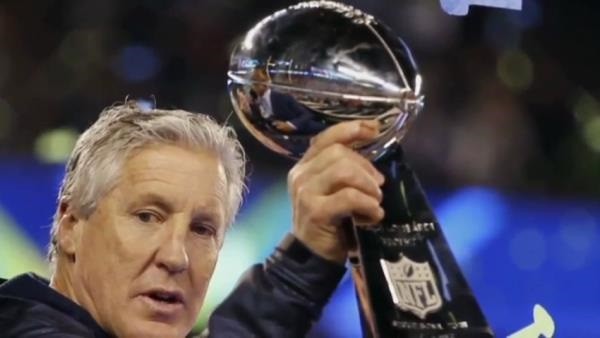 Looking for a way to help the sport of football with the issue of players leading with their head when tackling, Seahawks coach Pete Carroll has made an instructional video that has been embraced by the NFL and is being sent to high school and youth programs around the country.

As co-chair of the NFL Player Safety Advisory Panel, Hall of Fame coach John Madden knew something had to be done about players leading with their helmeted heads when tackling. But what? From Madden’s inquisitive mind to Pete Carroll’s proven method of teaching players how to tackle – and then some – that are featured in an instructional video.

“The video is excellent,” Madden said Monday during a telephone interview. “We’ve been looking for something like that for a long time. One of the things the Commissioner is trying to do is take the head out of football when it comes to tackling, not using the head for contact.

“So we’re working on that and the question was: OK, if we take the head out, what do we put in? And Pete came up with this video. It’s not only good, it’s great. When I first looked at it, it was beyond what I thought it could have been and it was as close to perfect as it could be.” Carroll, the Seahawks’ fifth-year head coach, has been perfecting the style of tackling that he and his defensive coaches teach their players since his days at the University of Southern California (2001-09). But it was this offseason that he compiled the instructional video – Hawk Tackling – that has been sent to 14,000 high school football programs and 8,000 youth football programs across the country through the Hudl video network.

“There’s so much talk around the league and around the game of football right now, that I wanted to see if we could contribute to helping people understand how you could play this game and do it in a great fashion and continue to promote the game,” said Carroll, who was assisted in the video project by defensive passing game coordinator Rocky Seto.

“This is a concept we’ve been working with for a long time and something that’s built into our makeup. But we just thought it would be worth sharing, and really hoping that it works its way through high school football and youth football to teach kids at an early age how to tackle and how to take care of themselves and play this game really fast and hard in absolutely the safest way possible.”

That this video is available at this time and from this coach – whose team won Super Bowl XLVIII in February 43-8 behind a defense that led the NFL in average points and yards allowed last season – only underlines the points emphasized.

“Coach Carroll sent me the video and I thought it was terrific,” NFL Commissioner Roger Goodell said. “It’s a great thing for our game to have the head coach of the Super Bowl champs teaching tackling techniques that protect the head and making it available to everyone. I hope players, coaches and parents at all levels of the game take the time to watch it.” If they do, they’ll see what Madden saw – and Carroll intended.

“It gave the answer,” Madden said. “OK, we take the head out and you put the shoulder and the arms and the techniques and the drills in. Everything Pete has there provides the answers that are perfect. “It was great for him to do that, to give back. And I think it gives the answers that we need. If we’re going to do some of these things the Commissioners has asked us to do, we need these answers.” Carroll’s video provides the answers in complete but also easy to understand fashion.

The video features not only members of the Super Bowl champion Seahawks tackling the way Carroll preaches, but also members of Australian rugby teams – a sport where the players do not wear helmets, so the tackler needs to protect his head as well as the opponent he is tackling.

“Rocky and I have talked about this for a long time,” Carroll said of Seto, who also was on Carroll’s staff at USC. “He has been a guy who’s really been a great advocate for us and really been the primary teacher of the technique and kind of the keeper of the flame a little bit. “We’re always looking for a better way to teach and so we thought, ‘Let’s put together a video and see how it works.’ I’m thrilled that we’re contributing.” Madden and the panel that is co-chaired by Hall of Fame safety Ronnie Lott already had addressed the helmet-to-defenseless-receiver issue.

“The helmet-to-helmet on the defenseless receiver, we had a change that was an easier one because you could still use your head you just had to change your aiming point,” Madden said. “But getting the head out of tackling was a much more difficult issue. So what Pete did was something that needed to be done and gives us all the answers we’re looking for. “Now we have a direction in which to go. Coming from Pete, I knew it was going to be pretty good. But I was blown away. It was beyond and above.”