Ohio Aviators Professional Rugby is back on ESPN+ October 25-26

Ohio Aviators Professional Rugby team is back and on ESPN+ this weekend. The Aviators have traveled to Bermuda where they will take on six other teams from around the world in a new competition called the World Tens Series which will be broadcast LIVE on ESPN+

The World Tens Series is a brand new professional Rugby Tens competition that will consist of ten players per team, playing in two (2) 10-minute halves per match. Each team will compete in five matches per round (weekend). Round One kicks off this weekend in Bermuda starting on Sunday, October 25, 2020. Competing in this global tournament will be seven teams filled with internationally capped players and Olympic rugby medalists. The Series will span three weekends in 2020, ending on November 8. Starting in 2021 the Series will expand to 12 locations and 16 teams.

The Aviators roster is bolstered by eight members of the United States Men’s National Team and an All-Star list of players from Major League Rugby (MLR) with five former members of the original Ohio Aviators 2016 team. Included in that impressive roster is Ohio State graduate, and recent 2020 MLR Draftee, Spencer Krueger.

If you cant watch the games on ESPN+, all the matches will be available on the World Tens Series – YouTube page.

You can can also follow the team and their journey on 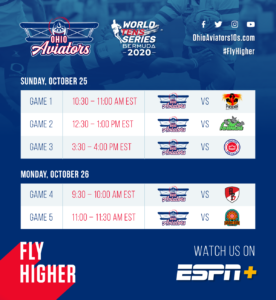