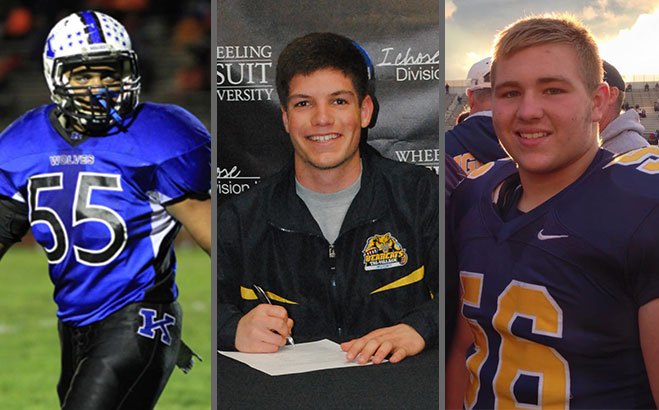 “We are excited to have these boys join our program,” said Jerpe. “They are all excellent athletes, and each bring a different set of qualities to the table. We look forward to them helping us build a strong team both on and off the field.”

Matthew has been the Captain of Tri-Village Rugby Club for the last two years where they finished as a State Runner-Up in 15’s won the first State Championship for Rugby 7’s. He is also a recipient of the Nate Ebner Award and “Man of the Year”(Backs) award from his club for his hard work, dedication and play on the field. Young is currently training with Tiger Rugby Academy and the 1823 Men’s 7’s team.

Off the field, Young is a member of his school’s Air Force JROTC program where he worked his way from Flight Sergeant to Corp Commander and also served as the Physical Training Officer for the squadron. Young was also elected the past two years as the Treasurer of the National Technical Honor Society. He has garnered numerous awards and recognition over the years for community service, JROTC “Outstanding Cadet” and successive years of Honor Roll membership.

A graduate of Saint Ignatius High School in Cleveland, Ohio, Rolf is a four-year, multi-sport athlete, competing in Football, Wrestling and Rugby.

Rolf is a three-year starter at prop for Saint Ignatius, one of Ohio’s strongest rugby programs. As a Wildcat, Rolf was part of an Ohio State Semi-finalist team in 15s, competed against some of the nation’s best at the Jesuit Cup Tournament, and won the 2013 Ohio State Rugby 7’s title.

In addition to St Ignatius Rugby, Rolf plays summer rugby with the Celtics Rugby program, coaches grade school football and rugby, and serves as a referee as well.

Originally recruited by Wheeling Jesuit University to run track, Meehan expressed interest in rugby as well. After learning about his athletic background as a three-sport athlete, the WJU rugby coaching staff wanted the opportunity to work with him as a crossover athlete.

As a 3 year Varsity Football starter (Defensive Tackle), Meehan was named to the 2013 All-Conference Second Team. As a wrestler he was a two time Varsity Letterman, named Second Team All Conference his Sophomore year and was Team Captain his junior year. In track (Open 100 and 4 x 100), Alex was a 4 year starter and Captain of the team his junior and senior year.

With his large frame and exceptional speed for his size, Alex is an exciting addition to the Wheeling Jesuit squad. The coaches are looking forward to determining how to best use Alex’s strengths and while converting him into a rugby player. In addition to playing rugby at WJU, Alex will potentially be running track as well.